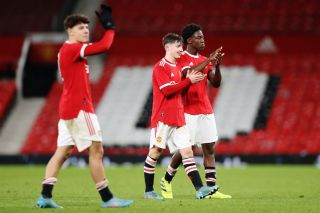 It’s the biggest game of the season for our academy lads. It does not get bigger than this at academy level with a sell out crowd expected at Old Trafford. This season has been full of ups and downs as the U18s are currently third in Premier League North and they face Nottingham Forest again on Saturday in the league.

United U18s have had a strange run of games lately due to games being postponed and called off due to weather conditions. They played twice in the space of 24 hours, but despite everything, this was viewed as a great opportunity to field two different teams and give everyone a chance to play.

In the end, this is exactly what academy football is all about. As our Head of Academy said in the official podcast, academy football is not about winning, but teaching you how to be part of a winning team. With all of the hype in the world, it needs to be understood that despite the pressure, players need to be ready for these type of games.

This U18s team is a collection of players who have played in different competitions throughout the season. You have the likes of Alejandro Garnacho making his first team debut, meanwhile others have come close to such events with constant training sessions with the seniors. This amazing journey started against Scunthorpe United in their 4-2 win at Old Trafford. One of the best things that have happened in the competition was United playing several games at home, having that extra support.

United were away at Reading in the fourth round and one of the most hard working players of the season, Sam Mather, played a vital role in United’s win. While some argue that playing at home has been one their biggest advantages, it has been a great responsibility for them to perform well at Old Trafford.

The Everton game itself was problematic with the team going behind early, but their response was almost immediate and throughout the game there were moments where you would think this was a tough game despite the final result. The following tie against Leicester had no shortage of emotions on the pitch. It was also the moment most United fans fell in love with Alejandro Garnacho and his two wonderful goals. Ever since that moment, Garnacho has been under the spotlight.

On the other hand, despite the fantastic Garnacho has had, one of the stars when it comes to the FA Youth Cup run, is Mather. Not just in terms of goals and assists, but also in his position of play. He is quick, versatile and agile on the wing and his immense hard work surely be paid off. Given the names we currently have in this level, people are not surprised we have done so well in the cup. Well, it has to be said that we previously have had talented players and one for reason or other, we were not lucky enough to see them lift the trophy.

Wolves paid a visit at Old Trafford for the semi-finals this season and in the end, the U18s triumphed and got the right to host the final. This is indeed a huge honour, but with great power, comes great responsibility. The turnout at Old Trafford is expected to be amazing, which means that the atmosphere will be the best they have ever encountered. Despite the euphoric moments among United fans, Nottingham Forest have a lot to play for in this final. They have been absolutely brilliant in the last couple of months, causing defeat to teams you would think we would face in the final.

Their semi-final against Chelsea was a great example of what we should expect from them. It has to be noted, their manager, is a familiar face in the academy ranks, being none other than Warren Joyce. A key figure for the youngsters who were part of the academy. So, those who know Joyce well, definitely maintain some sort of calmness and do not get carried away. Their come-backs have been nothing short but brilliant and their set up could cause a lot of damage to United. The turnout of their fans is expected to be higher than 5,000, worthy of a final and great support for what Forest have achieved so far.

Whatever the result, the game has already earned itself a place in the record books with ticket sales. All we have to do is enjoy it and get behind these talented young players. They have made the fanbase proud in strange times at Manchester United.