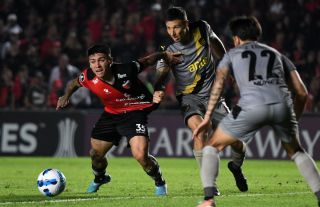 The 19-year-old Argentinian is currently playing in his home country, but it could be time for a big move to Europe if he continues to impress.

Despite his young age, Farias has made an impressive 56 appearances for the club, scoring 10 goals during that period. Those figures suggest that the young forward is a player for the future, as far as United should be concerned, but it still makes sense to scout these players.

According to AS, Manchester United have joined AS Roma, Sassuolo, Udinese, FC Porto and Paris Saint-Germain in the race for the youngster’s signature.

The report states that Farias will leave Colon for Europe this summer and it sounds like he will have plenty of options.

Moreover, the forward was subject to interest from River Plate and Boca Juniors but those attempts were pushed back.

It makes sense that United would look at the South American leagues to at least try unearthing the talent that exists.