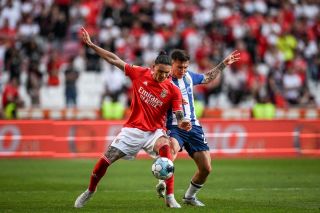 Benfica goalscorer Darwin Nunez is eyeing up a move to the Premier League.

After being listed as a transfer target at Manchester United, it will come as a boost to our chances that the Mirror claims Nunez’s advisors believe his style could be well suited to English football.

There could be a sticking point in that Nunez wants Champions League football.

There will be lots of competition for his signature this summer, with Manchester City completing a deal to sign Erling Haaland.

Bayern Munich could be in the market for a new striker if they lose Robert Lewandowski, while it is understood that Atletico Madrid are on the lookout for a goal machine.

Nunez is under contract at Benfica until 2025 and it is not thought that any club would need to pay his £130m buy-out clause, so a deal could be agreed for approximately £70m.

A lot cheaper and younger than Harry Kane.