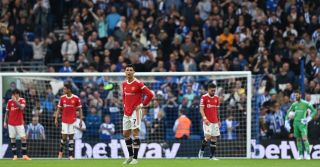 Manchester United’s crushing 4-0 loss to Brighton means we are officially out of the top four race.

To make matters worse, United can only finish the season with 61 points should we beat Crystal Palace in the last game.

That will be the lowest point total in the history of the Premier League for United.

Crystal Palace may be a dead rubber fixture but Ralf Rangnick won’t want another defeat added to his tally as manager.