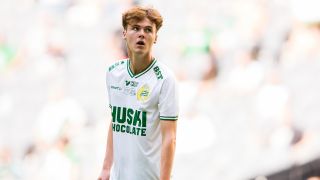 That is according to Swedish newspaper Expressen.

He also confirmed that the club would consider selling the youngster, adding: “Absolutely. Something could happen, but we have no stress or need to sell. In a way, I think we can feel even greater peace.”

After making his debut last July, aged 17, the youngster has made 13 first team appearances.

Swedberg is renowned as a talented midfielder but can also play on the left wing, where he scored five goals in six games this season.

Swedberg is under contract until 2024 which means Hammarby are under no pressure to sell this summer, but they would find it difficult to resist a good offer from a club like United.

A deal had been agreed in February for Lokomotiv Moscow to sign the youngster for less than £5 million – before Russia’s invasion of Ukraine.

According to Aftonbladet, Hammarby cancelled the deal once the war broke out.

Williot could now be on the verge of joining one of Europe’s biggest clubs.

I’m sure Anthony Elanga and Victor Lindelof would like to see another potential international team-mate join them at United.