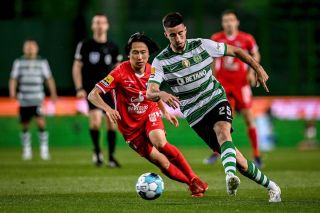 Sporting Lisbon centre-back Goncalo Inacio is attracting a bit of interest ahead of the transfer window.

It has been reported that Manchester United are impressed with the Portuguese defender’s level of performance this season. After watching us defend abysmally this season – conceding a whopping 56 goals – fans believe it’s an area that needs to be fixed.

The 20-year-old has played 42 matches this term, with five goals to his name, which is an impressive record for a centre-back. And, on top of that, Inacio has only managed to pick up one yellow card through the season making him a clean tackler.

Portuguese newspaper Correio da Manha, United have yet to make an official bid for Inacio, but the interest ‘is real’.

This could mean Inacio is on the same transfer list as Pau Torres this summer, though we’ve seen the Villarreal play at a very high level in Europe over the past two years.

Sporting youth coach Jose Lima told Renascenca that Inacio’s mindset and his versatility are among his assets.

He said: “The psychological aspect is one of his great strengths, as he shows a lot of tranquillity in any situation, in addition to his technical skills.

“In the formation, he could play as a left-back because his dominant foot is his left. Although at Sporting, now, he plays on the right side, even though that is not the dominant foot.”