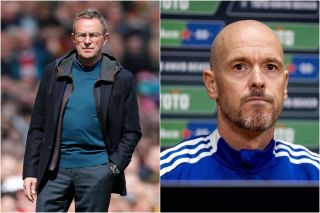 Manchester United have endured their worst Premier League season ever, with the 4-0 defeat at Brighton this weekend confirming a record-low finish in terms of points accumulated.

Victory in their last game against Crystal Palace would put them on 61 points, three points fewer than the previous worst finish in the 2013/14 season under David Moyes.

Erik ten Hag was confirmed as the club’s permanent successor to Ole Gunnar Solskjaer last month and the Dutchman, who is chasing a third consecutive Eredivisie title with Ajax, has quite the job on his hands.

Following the embarrassing defeat at Brighton, Rangnick admitted that he is still positive for the future and admitted that he’s confident there will be changes under the Dutchman.

“This has to be done at the end of the season,” he said in his post-match assessment, as per the official Manchester United website.

“I’m still very positive that with Erik Ten Hag we have a top manager next season and I’m also pretty sure the board has already made some changes and there will be more changes to come in the summer.

“I’m still positive that we can change the whole issue and show a completely different face next season and this is important, not only for our fans but also for the image of the whole club.

“If there is one good thing that we realise, it’s that there is a lot of space for improvement and that we need some changes.”

Very little clarity has been provided on the full extent of Rangick’s consultancy role this summer. The German signed up for a two-year advisory position but it has now also been confirmed that he will be managing Austria’s national team.

That does indicate that Rangnick’s role at United won’t be as bearing as many thought when his appointment was announced in December last year.

SN’s verdict…
Rangnick’s right about one thing and that is that United do have a very good coach on their hands next season. For the first time since Sir Alex Ferguson retired, it does feel like they have secured a manager with an upwards trajectory.

Ten Hag has been praised for his footballing mind and it’s now up to United to capture that and make the most of it. Certainly, they cannot afford to let another manager fail with a rebuild. The damaging effects of that are there for everyone to see in the current team.

Whether Rangnick will be watching from afar or actually being able to make a difference in United’s future remains to be seen. His torrid six-month spell in charge of the team won’t have helped his bid to influence major decisions.