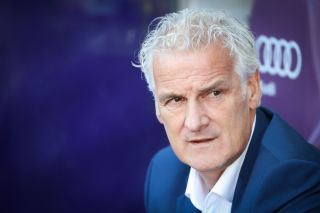 Erik ten Hag is set to take over at Manchester United this summer, with Ralf Rangnick set to oversee his final game in charge against Crystal Palace later this month.

The 63-year-old interim boss has presided over one of United’s worst half-seasons and the 4-0 defeat at Brighton this weekend ensured that United would finish on a record-low points tally.

Ten Hag was confirmed as the permanent successor to Ole Gunnar Solskjaer last month but none of his backroom staff has been confirmed, with Mitchell van der Gaag remaining the favourite to follow him from Amsterdam.

Fred Rutten, the former PSV and Feyenoord manager, has now revealed that he has rejected the opportunity to join Ten Hag at United.

“I have a family, I have grandchildren. I want to see them every now and then,” he told ESPN, via The Metro, explaining why he decided against making the move abroad.

“At Manchester United you get on a train and you can’t get off it. I want to feel comfortable in something you step into. That is the case with PSV.

“It’s nice when you have grandchildren, who you see every now and then and who can play ball with.”

Instead, the 59-year-old will be linking up with another Dutch profile. He has been confirmed as part of the coaching staff at PSV next season, with Ruud van Nistelrooy set to embark on his first managerial challenge.

“Of course I spoke extensively with Ruud van Nistelrooy,” Rutten continued. “He triggered me to give up the slightly freer life that I now have. He sat in the room with me and we talked for two hours about football and other things. And when talking about those other things in life, he also triggered me.”

Read more: Bruno Fernandes admits he was not fit to wear the Man Utd shirt in Brighton defeat

SN’s verdict…
We’ll never quite know if Rutten’s being completely honest or if his interpretation of an offer was merely a case of Ten Hag scouting the area.

It is, however, never a good sign if your incoming manager is struggling to assemble his ‘dream team’ staff. Ralf Rangnick struggled to get the people he wanted and also lost several members of the existing staff.

Ole Gunnar Solskjaer brought Mike Phelan with him and kept others on whilst Jose Mourinho lost his right-hand man Rui Faria ahead of his third season, which proved to be a big blow.

There’s no rush for Ten Hag – after all, he is still managing Ajax but will make sure to have all the pieces in place by the time he walks through the doors at Carrington.