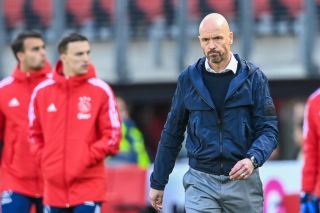 Manchester United’s incoming manager, Erik ten Hag, is closing in on a third consecutive Eredivisie title as he prepares to take the hot seat at Old Trafford this summer.

Ten Hag’s appointment was confirmed last month and although the second half of this season has been tough on Ajax, they are edging closer towards yet another domestic league title.

They are excruciatingly close to making that three titles on the spin after results on Sunday despite only managing a draw in their game against AZ Alkmaar.

His exciting Ajax side came back from behind to equalise in the 86th minute and initially, it looked like it was two vital points dropped in the title race.

Their blushes were spared later, however. Second-placed PSV took an early two-goal lead at Feyenoord just hours later, which would have put them within two points of Ajax.

Feyenoord scored twice at the end of the game and made sure the spoils were shared, maintaining Ajax’s four-point cushion at the Dutch summit.

Ajax now have the chance to secure the league title on Wednesday at home against Heerenveen, their penultimate fixture this season. Only three points are needed to confirm Ajax’s 36th domestic crown.

SN’s verdict…
After falling narrowly short in the KNVB Cup final last month, ending his Ajax tenure on a positive note is vital for Ten Hag before he takes on the seemingly impossible rebuilding job at Manchester United.

The 52-year-old would have liked to have secured the title by now but a slump in form and a host of injuries to key players have hampered their progression. Watching his future team’s performances in the Premier League won’t have eased the pressure either.