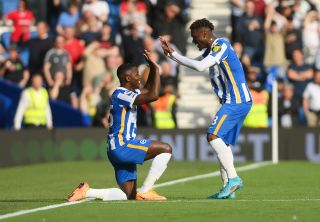 Manchester United are back in action on Saturday evening as they made the trip down to Brighton to face Graham Potter’s side. Qualification for next season’s Champions League is out of reach but with Erik ten Hag’s appointment confirmed, players will be aiming to impress the incoming boss.

Ahead of the game, Rangnick surprised supporters by opting to make no changes to the side which comfortably beat Brentford earlier this week.

In the middle of the park, Nemanja Matic and Scott McTominay were due to go up against Moises Caicedo, who was linked with a move to United prior to his transfer to Brighton.

"THROUGH THE LEGS OF VICTOR LINDELOF" 😬

Moisés Caicedo gets his first Brighton goal to put them 1-0 up against Manchester United! pic.twitter.com/aYgok6kF8y

Read more: Rangnick explains why Varane and Lindelof are keeping Maguire on the bench

And as expected, it was the young Ecuadorian who would open the scoring at the Amex Stadium, with the 20-year-old striking from the edge of the box, as seen above.

United now face a battle to fight their way back into the game, with only two victories from their final two games good enough to equal their worst-ever Premier League points tally.