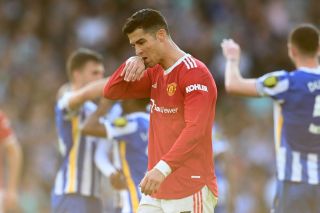 Manchester United lost 4-0 away to Brighton today. It was another embarrassing performance from this team as it became mathematically impossible for the Red Devils to qualify for next season’s Champions League.

We were shocking. Borderline farce.

Here’s how we rated each United player on their performance.

Slow to react to Brighton’s opening goal but let down by United’s defence for the three goals that followed.

Never fills me with confidence when he is asked to defend.

Outpaced and outpowered on repeat.

Just as bad as Lindelof – if not worse.

Carried out his role well before coming off at half-time.

Games catching up with him already?

Offered nothing before coming off.

Had a goal disallowed for offside and made plenty of runs.

The team’s source for energy. Came on with some fight in his belly.

Came close to scoring after winning a header inside the box.