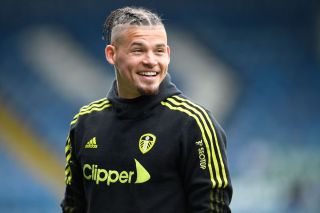 Leeds United midfielder Kalvin Phillips has publicly stated that he wishes to continue playing for his hometown club, despite recent links to Manchester United.

The homegrown midfield star is one of Leeds’ most sought-after players – along with Barcelona linked Raphinha (via Mirror) – and they could see a number of their best players leave in the summer if they are relegated from the top-flight to the Championship.

Phillips, 26, has had a few injury problems this season but he was previously named England’s Player of the Year after impressing on the international stage when the Three Lions reached the Euro 2020 final.

Now he appears to be a man in demand with his current deal at Leeds set to expire in 2023.

According to the Manchester Evening News, the Red Devils are working on a deal to sign Phillips in the summer, but Phillips has since underlined his desire to stay at Elland Road.

“I’ve made my intentions clear that I want to be at Leeds and I’ll focus on that until my contract ends,” Phillips told BBC West Yorkshire Sport.

“Until the end of the season, I’ll be happy at Leeds and I always will be.”

Maybe the Reds will change his mind with a brilliant offer at the end of the season? There is no denying that Phillips would significantly improve our midfield.