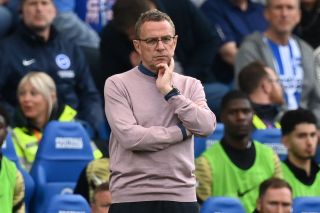 Manchester United have lost yet another game on the road this season, making it their fifth straight defeat on the road – their worst run in the first division since 1981.

Defeat at Brighton also meant that United are now destined to finish with their lowest-ever Premier League points tally, with victory over Crystal Palace in their last game taking them up to 61 points.

Furthermore, they have now conceded a whopping 56 goals this season, a new Premier League record for United, surpassing the 54 goals conceded in the 2018/19 season.

Spirits seemed to have been lifted by the 3-0 win over Brentford earlier this week but that optimism was swiftly wiped out by United’s underperforming stars once again.

Goals from Caicedo, Cucurella, Gross and Trossard ensured defeat for United in their penultimate fixture and John O’Shea, the former Manchester United and Ireland player, has reacted to the deflating result.

“A bad day all round. A low point, there’s obviously been a few this season but I think that’s the lowest,” he is quoted as saying by the official Manchester United website.

“For the new manager coming in, for him to see that, it gives him such a clear template of what is needed. Brighton are obviously a decent team, at home, played with intensity and they ran all over us today.”

SN’s verdict…
The worst thing about Saturday’s defeat at Brighton is that only a small portion of fans will be surprised by what they saw on that pitch. That performance is the carbon copy of several others this season.

The only silver lining is that we’re one game closer to the end of the season and with just one game remaining, supporters can finally start to look forward to a new era under Erik ten Hag.

The 52-year-old Dutchman is currently in a title race and will hopefully walk through the doors at Carrington with a third consecutive Eredivise title wrapped under his arms.