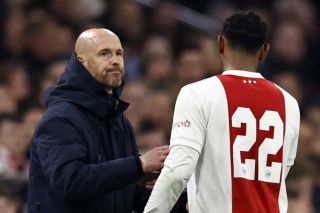 Manchester United are in for their busiest summer in modern history, with several outgoings and as well as incomings expected in a turbulent transfer window.

Six players are set to leave on free transfers and there are doubts over many key figures in the squad, with Marcus Rashford, Cristiano Ronaldo, Anthony Martial and others all yet to confirm whether they’ll be staying at Old Trafford.

Incoming manager Erik ten Hag, the current Ajax boss, will be allowed to make wholesale changes to the first-team set-up and subsequently, there have been endless links to some of his stars at the Amsterdam club.

“Of course, there is interest from clubs. But I always say: interest is something different than an offer and a transfer is something else,” he told NOS, via Football Oranje, when quizzed on his future.

“Of course, there is interest from clubs. But I always say: interest is something different than an offer and a transfer is something else.”

When pressed further on whether he would be joining Ten Hag in switching Amsterdam for Manchester, the Ivorian was blunt in his response: “Haha, no I won’t follow him. I feel good here at the club and in the city.”

Read more: Rangnick explains why Varane and Lindelof are keeping Maguire on the bench

SN’s verdict…
A striker is certainly on Manchester United’s wishlist this summer and Ralf Rangnick recently revealed that he had suggested three forwards to the club in January, only for his suggestions to be rejected out of hand.

That decision is likely to have been made due to the uncertainty over United’s next manager at the time but with Ten Hag’s appointment confirmed, we can expect to see the club press ahead with plans to bring a forward to Old Trafford.

As mentioned above, the futures of three forwards are already uncertain and Edinson Cavani will leave the club on a free transfer. There is also little clarity on Mason Greenwood’s situation, who hasn’t featured since January and is unlikely to play any role in the immediate future.

Haller’s track record with Ajax is impressive but his poor stint with West Ham is still lurking in the background and would explain any reservation about bringing him back to the Premier League.