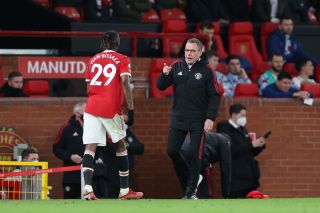 Aaron Wan-Bissaka has some decisions to make this summer.

The BBC linked the right-back with a return to Crystal Palace this week. It is suggested that a loan move could be on the cards due to Wan-Bissaka’s high wages.

While Palace are seemingly keen to sign Wan-Bissaka this summer, new Manchester United manager Erik ten Hag has not yet had the chance to have a proper look at the players who he would like to keep in his squad for next season.

However, United insider Jonathan Shrager has been told that Wan-Bissaka has desire to stay at Old Trafford next season. It is understood that he will wait to talk with Ten Hag to see where he fits into the Dutchman’s plans.

I am told that Wan-Bissaka’s focus and desire is to stay at Manchester United next season. Aaron will wait to talk with Erik ten Hag to see where he fits into the new manager’s plans

I wouldn’t hold by breath if I was Wan-Bissaka – knowing what managers like Ten Hag demand from their full-backs in the modern game.

Moreover, I can’t see the former Palace academy star improving his game dramatically in the final third and there is a reason Ralf Rangnick has been starting Diogo Dalot instead.

Only time will tell if Ten Hag plans to sign a new right-back in the summer.