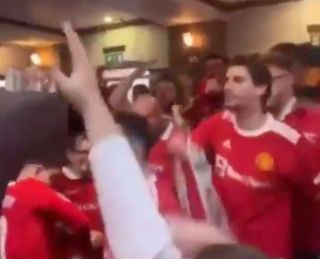 Manchester United comfortably saw off Brentford with a 3-0 win at Old Trafford on Monday evening.

While protests were held prior to kick-off, many United fans turned their attention to the arrival of new boss Erik ten Hag.

The 52-year-old wants to win the Eredivisie title before leaving Ajax at the end of the season, when current interim manager Ralf Rangnick moves into a part-time consultancy role.

As a fan, I have warmed to Rangnick, who has always been honest with his assessments of the squad and the job at hand to make Manchester United successful again. I don’t think he has what it takes to be a top manager, but he is still someone I would trust with rebuilding our club because it desperately needs a better football structure.

Fans were noticeably vocal in their support for Ten Hag before the Brentford match and a new chant was heard in the pubs and stands.

My manager already has a chant and I like it 👌 🙂 Erik Ten Hag 😍😍😍 pic.twitter.com/EkdxaIzYMJ

We reckon the chant needs a bit of work before next season. Let us know what you think in the comments section.