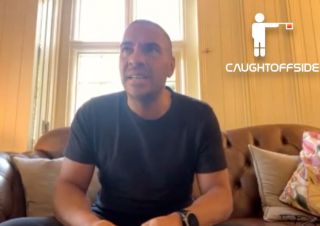 Stan Collymore’s opinion on Manchester United don’t matter, do they?

You take them with a pinch of salt whether it’s on Twitter or sport radio.

The former Liverpool striker has come out suggesting that Erik ten Hag should put every Manchester United player up for same this summer, with the Ajax coach moving to Old Trafford at the end of the season.

It went downhill from there because Ten Hag has forgotten more about football than Collymore will ever know.

After running through the current squad that Ten Hag will work with next season, Collymore told Caught Offside: “So, if I were Ten Hag, I would start with everyone being up for sale because in terms of a squad rebuild, who will the new manager look to build his team around? – He will look for honesty, hard work and integrity.

“Jadon Sancho certainly deserves to be looked at seriously by Ten Hag – we all know what he is capable of when fully fit and firing but what would his overall team look like? He is likely to play 4-3-3 with a high tempo. How many current United players can already fit that system? – Not many.

“I think their rebuild is such a big job that they will have to go nuclear and just say ‘everybody is for sale’ – they’ll always find buyers simply because they’re United. They should get rid of as many players as they can and then allow Ten Hag to rebuild from a much smaller core and base.

🔥 "Rather than say 'who should they let go'? It should be job done for them. […] A nice big headline saying 'Ten Hag: Everybody is for sale!"

🔥 "I don't think there is a #MUFC player who can perform over a season at the level of #LFC and #MCFC" pic.twitter.com/q30iru1Wo9