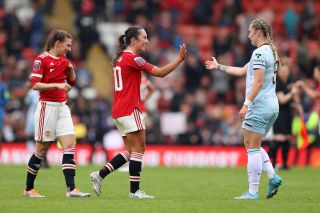 There has been a lot of criticised levelled at the club in recent years over the lack of training facilities for the women’s team – as well as multiple youth teams.

BBC Sport journalist Emma Sanders now claims the women’s team will have two new training pitches for their return in pre-season, which will prove beneficial as they prepare for a new season.

There was also an update on the club’s plans to invest in an improved training complex but that could take a few years.

Man Utd women will have two new training pitches for their return in pre-season. Club are working on a facility & "investing heavily" for a place over next few years. Also discussing how much to increase player budget. #MUFC

Sanders adds that United are currently having discussions about an increased transfer budget to help the women’s team battle for the biggest honours.

Better training conditions and more money for transfers shows that they are now taking the women’s game seriously and it’s about time!