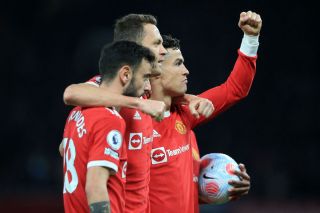 Cristiano Ronaldo and Bruno Fernandes have been named in the EA Sports FIFA Team of the Season, with United’s Portuguese pair among some of the division’s elite players.

It’s been far from a successful season for Manchester United but some of their stars have maintained a high level, which has been recognised in the annual Team of the Season by EA Sports.

Ronaldo, who could win the Golden Boot this season, is the joint-highest rated player on the team, level with Mohamed Salah at 97 overall (out of 99). Fernandes is rated 93, which is a downgrade by three ratings compared to his equivalent card last year.

Ronaldo was also named in the Team of the Year earlier this season, with his rating on that card also reaching 97.

Some of the biggest names in world football 🌍⚽️

The #FIFA22 @premierleague Team of the Season is here: https://t.co/hlhFqqGYdb pic.twitter.com/QZRMwAWI37

David de Gea was nominated for the team but although he did not make the final cut, the stellar goalkeeper was included in an honourable mention.

Players can earn these special versions of their favourite players by buying them on the in-game market or gaining them from rewards.