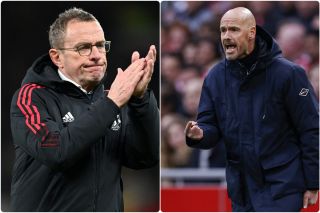 Ralf Rangnick has two more games as Manchester United manager before he moves into a new consultancy role at Old Trafford.

The interim manager will be tasked with reviewing the squad with new manager Erik ten Hag and I hope that the pair can work closely together next season. That, of course, will be down to Ten Hag as he needs to lay down a few markers.

At the same time, I would respect Ten Hag if he wanted to make use of Rangnick’s knowledge for the first summer before completely taking the reigns over in a bid to bring success back to Old Trafford.

It feels like Rangnick has been asked questions about Ten Hag’s arrival on repeat for the past two months and he has been equally consistent with his replies.

Right now, the focus for the two managers is on finishing the current campaign.

That won’t stop the same questions next week.

The players may be approaching the holiday season, but it will be a short break for Ten Hag and Rangnick if they plan to meet at the end of the season. And, on top of that, United have a lot of work to get done over the coming months.