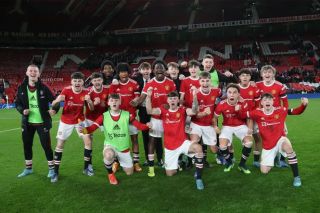 Over 50,000 tickets have now been sold for the FA Youth Cup final between Manchester United and Nottingham Forest at Old Trafford.

Match tickets cost just £1 and all proceeds go to the Manchester United Foundation, which helps disadvantaged kids in Greater Manchester.

As of now, 52,000 tickets have been sold, and the club recommends booking as early as possible to void disappointment.

The previous FA Youth Cup crowd record was set in 2008 when 38,137 fans attended our semi-final away to Arsenal, but this attendance will be far bigger than that.

It will be a challenge for our younger players to see how they manage playing in front of a busy Old Trafford.

Manchester United are the most successful club in the FA Youth Cup after winning the competition on 10 occasions. The problem is it has not been won by a United team since 2011 – when the team included Paul Pogba and Jesse Lingard.

Don’t miss your chance to be at Old Trafford for another historical night.