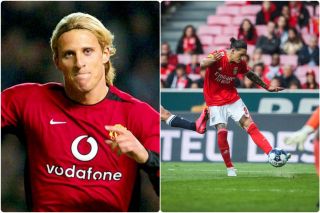 Uruguayan star striker Darwin Nunez has been urged by Diego Forlan to seriously consider a move to Manchester United over other clubs if the Red Devils make a move for the Benfica striker this summer.

Nunez has become one of the biggest names in European football this summer, scoring an incredible tally of 34 goals in 40 games. His six goals in the Champions League has earned him links to a number of elite clubs across Europe, including United.

The 22-year-old is set to become a major transfer target this summer and Forlan, who had stints in England and Spain, said the youngster would do well to follow in his footsteps by joining United.

“I think that he is a very good player, a good kid who is doing really well at Benfica and is enjoying a strong season,” Forlan told Breaking The Lines, as cited by the Daily Mail.

“It is not just the Portuguese league where he is doing well but in the Champions League too.

“He is a player who has a lot of potential and he could fit in at Manchester United. But obviously, everyone needs to have patience, although he is getting better with more and more experience.”

Reading what Forlan has to say makes me think that Nunez coming in as Cristiano Ronaldo’s understudy makes perfect sense. On top of that, the Portuguese star is set to be told not to expect to start every week next season.

Nunez could be the ideal replacement for Edinson Cavani this summer – but younger with more desire to play.