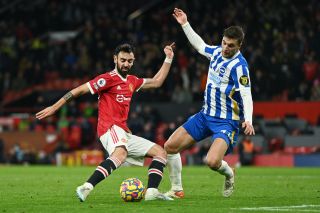 Manchester United will be looking to end the season on a high when they take on Brighton in the Premier League at the American Express Community Stadium on Saturday evening.

The Reds go into the game on the back of a 3-0 victory over Brentford on Monday night whilst the hosts ran out 3-0 winners over Wolves last weekend.

Cristiano Ronaldo will once again lead the Reds attack against Brighton having scored nine goals out of United’s last nine games. Juan Mata could also feature having impressed against Brentford last time out.

With just two games left to play, the end of the season cannot come fast enough for the Manchester United faithful. With the top four all but gone the Reds have little to play for but having arguably put in one of our finest performances of the season against Brentford on Monday night its important United build on that victory and end the season on a high but it wont be easy.

Brighton have enjoyed a great season under Graham Potter and currently find themselves sitting in ninth place in the table. In years gone, Brighton have been battling to beat the drop but this year have enjoyed their best season in the Premier League yet and in order for United to beat them we will have to be at our very best.

Games against Brighton in the past have never been easy and I expect this one to be no different. Brighton will fancy their chances to get a result against United and are likely to give it a real go and with that comes plenty of gaps at the back which Ronaldo, Fernandes and co can take full advantage of.

It will be a tricky game for United but its one which I do think we will win albeit it will be a close affair.