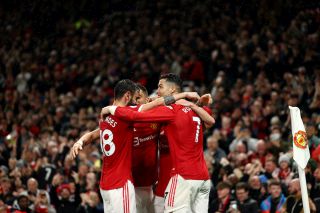 Cristiano Ronaldo has been nominated for April’s Premier League Player of the Month award.

BREAKING: The Premier League’s nominees for April's Player of the Month award are in! 🏆🔥 pic.twitter.com/gterYicimf

Ronaldo made important contributions in a difficult month for Manchester United. The Reds have slipped out of the top four race but the 37-year-old picked up club awards for player of the month and goal of the month.

The Portugal international scored his 60th career hat-trick against Norwich City in April and it was his third goal that day that won him United’s Goal of the Month award.

His overall tally for April was five goals in four games.

It started with a stunning hat-trick against Tottenham. He followed that up with another Old Trafford treble against Norwich as United won by the same 3-2 scoreline.

Ronaldo’s other goals came against Arsenal and Chelsea.

Voting closes at midday on Monday 9 May and the winner will be announced on the following Thursday.