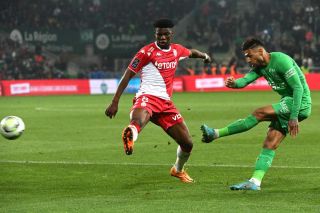 Aurelien Tchouameni has left the door open to more transfer speculation over a potential transfer move away from AS Monaco amidst reports of Manchester United’s growing interest in the Frenchman.

Speak to anyone to watches Ligue 1 regularly enough to have an opinion on it and they will tell you that the 22-year-old holding midfielder is one of the hottest properties in French football right now.

It’s encouraging to see United linked with players like this.

Tchouameni has had another stellar campaign for Philippe Clement’s men, featuring in 47 games (across all competitions), and interest from European royalty like Real Madrid is sure to bump up the asking price – but I would argue this is a player with a higher ceiling than Declan Rice, who has been linked with a move to Old Trafford in recent months.

“I am contracted here until 2024 with the option until 2025,” the former Bordeaux ace told reporters, as cited by the Mirror. “We’ll see what the future has in store for me.

“The transfer window is always a period where lots of things can happen.

“There is my personal case, but there are cases for lots of other players who are out of contract or who perhaps have desires elsewhere.”

Ten Hag will has a big task ahead of him to rebuild this squad but Tchouameni would be a great start..