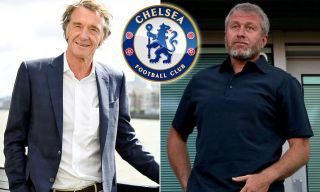 There is a new story on the sale of Chelsea Football Club every day.

The latest is that British billionaire and Manchester United fan Sir Jim Ratcliffe’s £4.25 billion-pound offer to buy Chelsea has been rejected.

Bloomberg claim that the Manchester-born businessman’s offer to buy Chelsea has been ‘dismissed’ by Raine Group, the bankers handling the sale of the club.

Maybe Jim will think about putting some of his fortunes into a club closer to where he grew up. One he claims to support. That club is Manchester United – currently run by leeches.

“We’ve been rejected out of hand by Raine, but we will keep reminding people we are still here,” Tom Crotty, a director at Ratcliffe-owned chemicals producer Ineos Group Ltd, said during an interview with Bloomberg on Wednesday.

That gives the impression that Ratcliffe is not giving up on his bid to buy Chelsea even if Todd Boehly’s group appear to be the front runners.

Sadly, he doesn’t seem to care about what is happening at Old Trafford under the Glazer ownership.