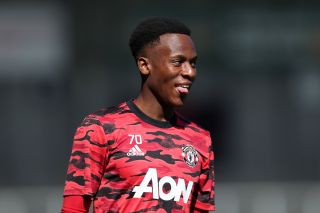 Manchester United youngster Noam Emeran has committed his future to the club by extending his contract for another two years, with an option to extend his stay for a further year.

The tricky winger has impressed in the club’s youth set-up and has now been rewarded with fresh terms, with his new contract set to expire in 2024.

Emeran’s deal was due to expire this summer but according to journalist Simon Peach, a new deal has now been agreed upon.

Noam Emeran has signed a new deal at #MUFC until 2024, with the option of a further year. The 19-year-old joined from Amiens in 2019

Emeran joined United three years ago and the Frenchman is now on the periphery of first-team football, having been spotted in first-team training earlier this year.

Ralf Rangnick has not been afraid to hand out taste tests of a senior match-day experience but the German has been reluctant to field United’s youngsters so far this season, with Hannibal Mejbri and Alejandro Garnacho recently only mustering brief cameos against Liverpool and Chelsea respectively.