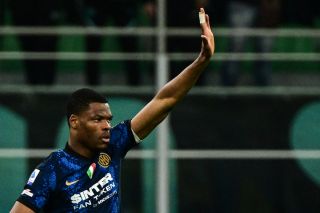 The 2021/22 season isn’t over just yet but it’s fair to assume that most people are already starting to look at what Manchester United will be up to this summer.

This year will arguably be United’s biggest rebuild in modern history and Erik ten Hag, the incoming manager, has quite the job on his hands.

Ten Hag signed a three-year contract with the option of a further year and as expected, several Dutch players have already been linked with a move to Old Trafford.

Inter Milan star Denzel Dumfries is the latest, with the wing-back impressing in his first Serie A season. Dumfries replaced Achraf Hakimi at the Italian club and has exceeded expectations, which has promptly led to transfer rumours.

According to Tuttosport, via Sport Witness, Dumfries is a player Ten Hag would like at United and the 26-year-old has reportedly been placed on top of Ten Hag’s wishlist.

A move is unlikely to be cheap, however, with the report claiming that Dumfries’ value has more than doubled since he made his €15m move from PSV Eindhoven last year.

The report comes just days after speculation over Aaron Wan-Bissaka’s future started circulating on social media, with a return to Crystal Palace mooted as a possibility.

Diogo Dalot, who is the current first-choice in that position, has just one year remaining on his current deal and could leave the club unless he commits to a long-term deal.