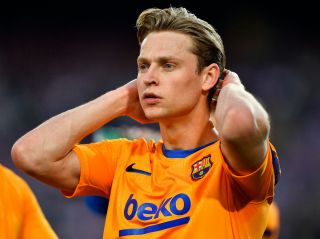 We have cited the multiple reports linking Barcelona star Frenkie de Jong to Manchester United in a summer move.

At first it excited us – but is it another one of those rumours we see every year that will drag on all summer?

While nothing has come from the Dutch press just yet, the Spanish newspapers are having a field day with the constant speculation.

It appears United have been handed a huge boost if Erik ten Hag has genuine interest in linking up with his former Ajax midfielder at Old Trafford, after a recent report from Sport claims Barcelona are prepared to listen to offers.

My initial thought at De Jong joining United was ‘there is no way we’ll get one of Barcelona’s most prized assets’, but there’s clearly some encouragement from the La Liga side.

This decision from the Camp Nou outfit has apparently been prompted by their desire to sign Valencia midfielder Carlos Soler, but that is a deal that could see De Jong replaced and allow the club to spend more money on new recruitments as Xavi will want to build his own Barcelona side.

Signing De Jong would see United getting a midfielder fit for purpose, which is not something they have done for years with below par recruitment.