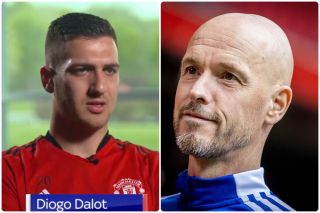 Diogo Dalot is excited to work under Erik ten Hag next season.

While many reports suggest the new manager will want to shake up the team in the summer, with several players leaving in the summer when their contracts expire, Dalot has opened up on the prospect of working with Ten Hag.

He says his team-mates are relishing the opportunity to work under the Dutch coach, highlighting his ‘attractive’ style of play and remarkable work to date at Ajax.

Speaking to Sky Sports, he said: “I don’t think you need to see a lot to know that he’s a great manager. What he’s done with Ajax is something outstanding.

“He plays very attractive football, I think every fan of United is excited to have a manager like this, and we as the players are as well.

“In our heads, it’s going to be clear who the manager will be next season and that’s good, because we go for our break… knowing who to expect.

“Then we’ll have time in pre-season to work together, get our ideas right and start the new season.”

🗣 “I think every fan of [Manchester] United is excited to have a manager like this.”

It beggars belief that we’ve seen so little end product come from the right, even though Dalot is more willing to get forward than Aaron Wan-Bissaka, who could be sold in the summer.

Both full-backs appear to be surplus to requirements in the modern game. You only need to look at the top teams and how many goal contributions their full-backs rack up every season.

We will have wait and see if Ten Hag can separate the players who underperformed this season and those who simply aren’t good enough.