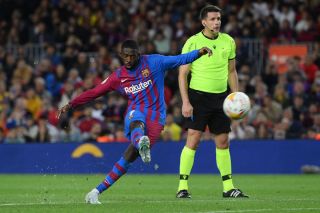 The Barcelona winger is out of contract in the summer but the Camp Nou side are still hopeful of agreeing terms with the France international.

According to The Express, Dembele turned down a contract offer at Barcelona earlier this year, so they will need to act fast if it’s true that United are trying to sign him this summer.

Now El Chiringuito journalist Dario Montero claims United have submitted a contract offer to the player worth between £8.4m (€10m) and £12.5m (€15m) net per person.

Montero adds that Paris Saint-Germain are also in the race to sign Dembele if he decides to leave Barcelona.

He adds that Barcelona are aware of the offers, though only time will tell if these reports carry any weight.

Dembele has been linked with a move to United a lot in recent years without a deal ever materialising and this is a good time for his agents to work on getting the best deal possible out of Barcelona.

On a side note, anyone who watches Erik ten Hag’s Ajax side will tell you he likes wingers. His face will be priceless when he realises we’ve got no quality on the right – unless he thinks Amad Diallo deserves a chance next season.