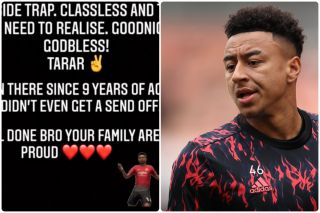 It was the final home game of the season and the squad did a lap of appreciation at full-time, which included Jesse Lingard has his team-mates, but it was also a chance for the fans to say goodbye to the players who will be leaving in the summer.

Although interim manager Ralf Rangnick opted to prioritise goodbyes rather than introducing new talent on the night, Lingard was an unused substitute after missing out on a few training sessions last week.

Juan Mata, Nemanja Matic, Edinson Cavani and Phil Jones all played as they made their final Old Trafford appearance in a United shirt.

You can understand why Lingard would be upset at being the odd man out, however, that does not excuse his brother publicly slamming the club – something he has done repeatedly over recent months. UnitedPeoplesTV documented this earlier today in a new YouTube video as seen below:

Hopefully Erik ten Hag can put an end to this sort of behaviour because it looks just as bad as the dressing room leaks you see in the mainstream media.

Let us know in the comments section where you think Lingard will end up next season?