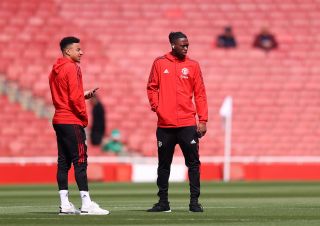 Aaron Wan-Bissaka is one of the many players at Manchester United who faces an uncertain future after another underwhelming campaign at the club. Now Crystal Palace are reportedly considering a move to bring him back to Selhurst Park.

A loan deal has been ruled out due to the right-back’s wages but, in order to get a move back to Palace, one would think he’d need to take a pay cut.

According to BBC Sport, Wan-Bissaka could be set to return to Palace after leaving the club in a £50 million transfer in 2019. It remains to be seen how much they would offer for his signature because United can’t expect to make a profit on a player who has hardly developed since joining the club.

Not only has Wan-Bissaka never been called up to the England squad, he lost his place in the United line-up this season following Ralf Rangnick’s arrival when the German made it clear he preferred Diogo Dalot on the right side of his defence.

Palace could be in the market for a new right-back with Nathaniel Clyne and Joel Ward both in their thirties, and with Wan-Bissaka they would be acquiring a player who they’ve been happy with in the past.

While Erik ten Hag has not had the chance to properly assess his squad, we are sure that he will request Rangnick’s judgement on a couple of players and Wan-Bissaka is not someone we can see fitting into the Dutchman’s plans.