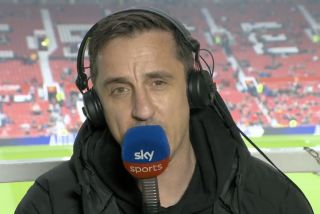 Ten Hag has agreed to take over from interim manager Ralf Rangnick and will now become United’s next permanent boss in time for next season.

Tasked with restoring the club back to its competitive days, the Dutch tactician must first work out a way to get the side back firing and Carragher believes it is something that can be achieved within three seasons.

Comparing Ten Hag’s job with the one Liverpool boss Jurgen Klopp was faced with when he arrived in Merseyside several seasons ago, Neville suggests the Dutchman’s upcoming project is even tougher because of how settled his managerial counterparts are.

Listen to the full dialogue below:

Will Erik ten Hag ‘do a Jurgen Klopp’ at Man Utd? 👀@GNev2, @Carra23 and Roy Keane look at the MASSIVE job the Dutchman is about to walk into at #MUFC – and how it compares to the challenge Klopp faced when he arrived at Liverpool 👇 pic.twitter.com/1qFGSc915o