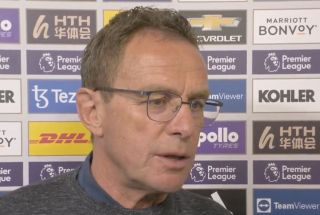 Manchester United are preparing for their final home game of the 2021-22 season.

After being dumped out of all cup competitions, as well as well out of the running for the top-four, the Red Devils, led by interim boss Ralf Rangnick, have very little to cheer about.

With fans furious and walk-out protests planned, it will hugely important that the side do their best to end the season on a high note.

Rangnick knows the Bees aren’t a side to be taken for granted though and speaking before the game, the German tactician has urged his side to ‘raise the level’ in order to take maximum points away from Old Trafford on Monday.

🗣 “I think it’s important to finish the season on the best possible note.”