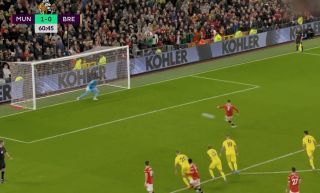 Cristiano Ronaldo is making a strong claim to Erik ten Hag that he should be kept at Manchester United next season, scoring again tonight against Brentford.

In many ways, Ronaldo has tried to set the standards at United this season — and I don’t think he should be blamed for it not quite working with this group of players (many who want to leave at the end of the season).

He took his penalty kick superbly tonight as he drilled the ball down the left.

The goalkeeper had no chance as Ronaldo added to his tally this season, which currently stands at 24 goals.

Cristiano Ronaldo wins a penalty for Man Utd and then slots it home to make it 2-0! 🔥 pic.twitter.com/ScvoVi6dbG