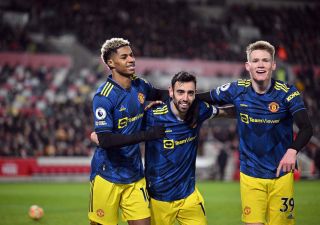 Manchester United will be looking to keep their faint top four hopes alive when they take on Brentford in the Premier League at Old Trafford tonight.

The Reds go into the game on the back of a 1-1 draw with Chelsea at Old Trafford on Thursday night whilst the visitors drew 0-0 with Tottenham Hotspur last weekend.

Jadon Sancho remains a doubt to face Brentford with tonsillitis, however, Cristiano Ronaldo is once again expected to start as he bids to try and overhaul Mohamed Salah for the Premier League golden boot award.

With just three remaining games left to play the end of the season cannot come fast enough for Manchester United. With top four all but gone, it could be argued that missing out on Europe altogether could be the better option for United ahead of next season.

That said, with Brentford being the final home game of the season, we want to bow out on a high and give the Old Trafford faithful something to shout about.

Brentford have enjoyed a successful debut campaign in the Premier League and currently sit 14th position in the table. The Bees are always willing to give teams a go much like Leeds did last season and, in order for United to defeat Brentford, we need to be at the races.

Brentford’s attacking style of play in many respects could benefit United massively here and with Ronaldo in top form, you wouldn’t back against the Portuguese bagging another hat-trick here.