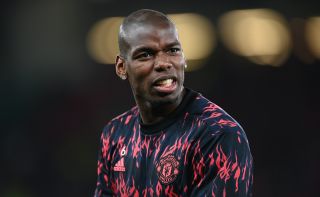 Manchester United have offered Paul Pogba the best offer that has been tabled for the French midfielder, according to reports.

According to reliable journalist Gianluca Di Marzio, United have offered Pogba the most lucrative contract in order to try convince him to stay.

It is stated that if Pogba wants the same salary as before, he has to stay in Manchester, which says a lot about the apparent interest in his signature. If only he played his cards wiser in recent years – rather than constantly flirting with the idea of leaving the club.

See below as Di Marzio is quoted by @utdreport on Twitter as saying that he’s not sure Real Madrid will prioritise a deal for Pogba this summer and, in the same interview with betting firm Wett Freunde, he admits he wouldn’t rule out the 29-year-old staying at Old Trafford.

Gianluca Di Marzio: "I don't think they [Real Madrid] care about Paul [Pogba]. Every year the two are linked, but I don't think he's a choice." #mulive [@wettfreunde]

“I’m not so sure that he won’t sign a contract extension,” Di Marzio said.

“It depends on how he imagines his future and his life. Because the contract with Man United is the most lucrative that is offered to him. If he wants the same salary as before, he has to stay in Manchester. He has an enormously high salary at the moment and only United can continue to offer him a similar salary.

“If he thinks to himself: ‘Okay, I’ve made a lot of money in my career, now I want to play at a club I love or where I’ll have a new experience’ but accept half the salary for it, then he has several offers to choose from.”

#mufc have offered Paul Pogba the most lucrative contract. If he wants the same salary as before, he has to stay in Manchester. He has several offers to choose from elsewhere #mulive [@DiMarzio, @wettfreunde]

For some time now, I feel most fans have accepted that he will be leaving in the summer. The club should take the inevitable financial hit as a consequence for not cashing in last summer, and I can’t say I will lose any sleep knowing Pogba won’t be a member of Erik ten Hag’s squad next season.

The contract details are unknown, other than the allegation that it’s far more than any other club has offered.

Obviously, these new reports suggest that Pogba could actually stay at United and sign a new deal in the coming weeks, but I can’t see that happening.

Unless Pogba moves to another Premier League outfit, he won’t have many options across Europe because of the wages will demand. Reports in Italy suggest Juventus haven’t got the money to strike a deal in the transfer window.

Pogba has burned too many bridges. United should remove their offer immediately.