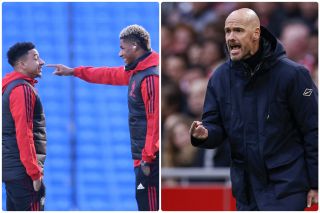 Some good news for Marcus Rashford and Jesse Lingard at least!

It sounds like Erik ten Hag wants the pair to be part of his squad next season, which could see Lingard make a U-turn as it looked certain that he would leave the club when his contract expires this summer.

The Sun suggests that Lingard and Rashford will be offered a fresh chance at United under Ten Hag when he takes over ahead of next season.

Lingard could easily turn down this lifeline offer from Ten Hag and move on instead, and it would be interesting to see if he can replicate his form on loan at West Ham last season — throughout an entire season elsewhere – but there is no denying that he has not got enough minutes this season.

That’s why it probably makes sense for Lingard to leave.

Meanwhile, ESPN claim the England international wants to leave Old Trafford for first-team football after falling out of favour at United, and it could be that a move to Italy is the most likely next step for him.

That would surprise me because I don’t think Lingard is fond of the idea of leaving England.

Lingard has been linked with moves to Newcastle United and West Ham.