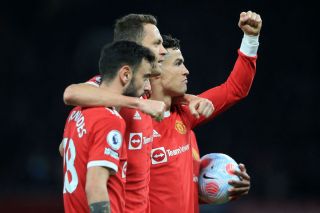 Cristiano Ronaldo has been voted as Manchester United’s Player of the Month for April, the club has confirmed.

Portuguese superstar Ronaldo scored 5 goals in 4 appearances for the Reds in April and could bid a final farewell to Old Trafford tonight, in our last home game of the season against Brentford.

According to ManUtd.com, Ronaldo’s competitors for the accolade were Nemanja Matic and David de Gea, but he picked up 74% of the vote.

Ronaldo scored 3 of his 5 goals with a hat-trick against Norwich City.

He also scored in the defeat to Arsenal and helped salvage a point on Thursday night in the draw against Chelsea.

This means Ronaldo has won consecutive United Player of the Month awards – a feat only bettered by David de Gea, who won POTM in November, December and January.

On top of that, Ronaldo has won the award four times already this season, more than any other United player.

Only twice this season has our POTM not been won by Ronaldo or David de Gea.

Will tonight be Ronaldo’s final game at Old Trafford as a Manchester United player?

Do you think tonight will be Ronaldo’s final game as a #MUFC player at Old Trafford? 🐐🔴

With uncertainty over Erik ten Hag’s plans for United and the Reds pretty certain to miss out on Champions League football, I think there will be lots of speculation over Ronaldo’s future in the summer.

While I would like him to stay until the end of his contract, ultimately that decision should come down to the manager. He needs to change a lot of things at the club and getting rid of a player like Ronaldo, in his first season, would be a huge statement.

Our running poll is available on Twitter – see above or click here. You have between now and kick-off to let us know whether you think Ronaldo will be saying a final farewell to Old Trafford tonight.