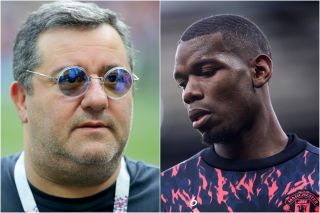 Manchester United midfielder Paul Pogba has shared a touching tribute after the death of his agent, Mino Raiola. The pair are understood to have been very close and the Italian superagent sadly passed away earlier this week.

The pair have been working closely together for all of Pogba’s senior career, with the Italian masterminding his move to Juventus and subsequently the return to Manchester four years later in 2016.

Following a bout with illness, Raiola sadly passed away this weekend and Pogba was one of the first of his clients to pay tribute to the late agent, as seen below.

“Always in my heart. Thank you, Mimi,” he wrote in the caption beside the touching tribute.

Raiola also represented several other United players over the years, with Zlatan Ibrahimovic, Eric Bailly, Henrikh Mkhitaryan and Sergio Romero all siding with him. He also briefly represented Jesse Lingard in 2020.