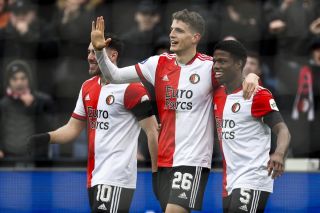 Erik ten Hag was announced as Manchester United’s new permanent manager last month and the Dutchman has quite the job on his hands. He is, however, currently chasing a third consecutive Eredivisie title with Ajax and will not begin the Old Trafford job until the end of the season.

Ten Hag’s arrival has come with an expectation of a Dutch influx of players at United, as expected, and the latest player to be linked with a move is Feyenoord left-back Tyrell Malacia.

The young defender has emerged as one of the most exciting youngsters in the Eredivisie and his performances have caught the attention of Ten Hag.

That’s according to The Mirror, who claim that Ten Hag has identified Malacia as potentially his first signing following his appointment on a three-year contract.

As per the report, Ten Hag tried to sign the 22-year-old for Ajax last summer but after failing to do so, he’s now set to make another attempt this year.

France giants Olympique Lyon are also said to be interested and Feyenoord are understood to be expecting £20m for the sale of their star defender.

SN’s verdict…
There are a couple of positions of concern in this summer’s transfer window and defence is definitely one of them. Luke Shaw, United’s undeniable first-choice left-back, enjoyed a brilliant 2020/21 season and also starred for England at the European Championship.

The 26-year-old has badly struggled this season, however, and his future is far from certain. The defender has yet to commit to a new contract and his competitor, Alex Telles, could leave the club.

Malacia has one goal and four assists in the Eredivisie this season and Ten Hag likes his full-backs to be efficient in the final third, which could explain why he would want the Feyenoord star at United.