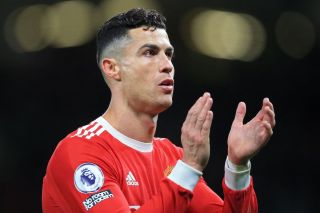 Manchester United have relied heavily on Cristiano Ronaldo’s goals this season and if it wasn’t for his 17 strikes in the league, the prospect of no European football next season would have been a reality.

Although a top-four finish is out of reach with three games to go, United are likely to finish fifth and thus qualify for next season’s Europa League, a tournament they will be desperate to win after last year’s disappointment.

Ronaldo signed a two-year contract last summer and despite comfortably ending the season as his sides most influential player, there is now uncertainty over his future, according to reports.

That’s according to The Mirror, who have linked the 37-year-old superstar with a shock move back to Real Madrid, the club he spent nine years at between 2009 and 2018.

As per the report, the question marks over Ronaldo’s future have come following Erik ten Hag’s appointment, with Real Madrid said to be increasingly keen on bringing the Portuguese legend back to the Santiago Bernabeu.

Madrid are said to have been impressed with Ronaldo’s performances in the Premier League and leading figures are now open to bringing him back to the newly-crowned La Liga champions.

SN’s verdict…
Next season will be Ronaldo’s first outside the Champions League in his senior career if he stays at United and that could have an impact on his future.

United will, however, be desperate to keep him around as they eye to give Ten Hag the best possible tools for his first season. United are set for one of their busiest transfer windows in modern history and although a striker was already on the agenda, losing your top scorer is hardly a positive start.

Ultimately, much will fall on whether Ten Hag is keen on using Ronaldo for another year or if he prefers to bring in a younger striker, with Benfica star Darwin Nunez heavily linked with a Premier League move.