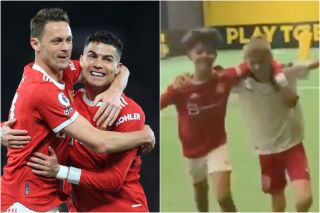 Cristiano Ronaldo’s strike to put United level against Chelsea earlier this week was his 17th of the season in the Premier League and the Portuguese forward seems to have struck up a relationship with Nemanja Matic on the pitch in recent weeks.

The former Serbia international also assisted Ronaldo’s goal at Arsenal the week – unfortunately for Ronaldo, an exit is looming large for Matic, who is playing out the final few weeks of his Old Trafford career.

The goal against Chelsea was good, however, with Matic clipping a beautifully chipped pass to Ronaldo, who controlled it to perfection before giving Edouard Mendy no chance in the Chelsea net.

The pair’s two sons also seem to have hit it off, with the two youngsters deciding to recreate the goal, as seen below.

The finish from Ronaldo Jr wasn’t quite as emphatic but the attention to detail is stunning, with the celebration also matching their elders.