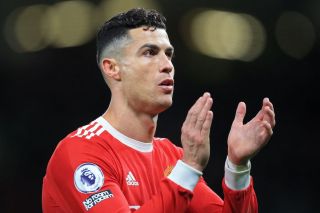 Manchester United played out an unconvincing 1-1 draw with Chelsea in the penultimate home game of the season, with the build-up of the 90-minute affair largely overshadowed by the planned protest against the club’s ownership.

Similar protests were seen in the previous home game against Norwich and more of the same can be expected against Brentford on Monday.

On the pitch, United continued to go through the motions and offer very little optimism for the rest of the campaign but as per usual, Cristiano Ronaldo was there to bail them out.

David de Gea – 7
Made a couple of good saves to keep United in the game, with Chelsea creating several high-quality chances in the first half.

Diogo Dalot – 5
Not his side’s worst full-back on the night but it was another poor defensive performance.

Raphael Varane – 7
Recently made his return to the side and United will need him to stay clear of injuries – the Frenchman is going to be a pillar in Erik ten Hag’s revolution.

Victor Lindelof – 6
Misjudged a number of situations and was lucky to not be at fault for an early goal.

Alex Telles – 3
It’s been a disastrous calendar year for the Brazilian and 90 minutes against Reece James, the best right-back in the league, hardly did his confidence any good.

Nemanja Matic – 8
United’s best player on the day alongside Ronaldo. The chipped assist was mesmerising and for a while, it looked like Matic had wound the clock back by a couple of years.

Scott McTominay – 6
The midfielder wasn’t his usual combative self in the middle of the park, arriving late in several duels.

Anthony Elanga – 6
Not the easiest game for the young Swede.

Marcus Rashford – 5
Another player who is enduring an incredibly difficult time right now and there’s no sign of any improvement in his form, unfortunately.

Cristiano Ronaldo – 8
Where would United be without Ronaldo this season? His sublime strike was his 17th of the season in the Premier League, taking him to second in the league’s scoring charts.

Substitutes
Juan Mata – 7
An impressive cameo from the Spaniard, who has emerged from the trenches in recent weeks to become Rangnick’s go-to man from the bench.

Phil Jones – 6
Came on and did a fine job on Lukaku, denying him a shot on goal late in the game.

Alejandro Garnacho – N/A
Only featured for a couple of minutes and hardly touched the ball but what a proud moment for the young Argentinian, making his senior debut for the club at just 17 years of age.