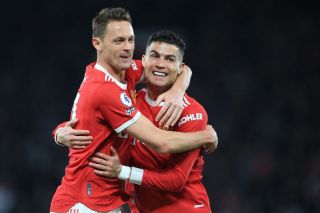 Cristiano Ronaldo is continuing to defy the odds this season and after being heavily criticised halfway through the campaign, the Portugal international is making sure to end the season on a high note.

The 1-1 draw with Chelsea on Thursday evening was a somber event, with neither side having anything of significance to play for in terms of league position.

Pride was, however, at stake. And Ronaldo was United’s standout player once again. Less than two minutes after Chelsea opened the scoring in the second half, Ronaldo struck back to score his 17th league goal of the season.

He’s the only United player to hit double figures for goals this season and that sublime strike against Thomas Tuchel’s side now means that Ronaldo has scored eight out of United’s last nine goals in the league – an extraordinary stat that further proves his importance to the side.

The reality is that there is a real chance that Ronaldo isn’t at the club beyond this season but should that be the case, it certainly won’t be due to his own performances.

United are on course for their worst Premier League campaign ever and despite that, Ronaldo is most likely going to hit the 20-goal mark – a spectacular return.