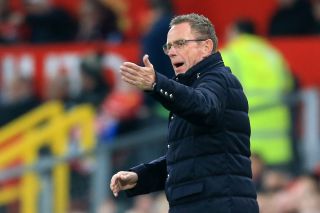 Manchester United have confirmed that Ralf Rangnick will take up a role as Austria’s national team manager, with the current United interim boss set to juggle the gig alongside a consultancy role at Old Trafford.

The club announced the appointment on their official website on Friday – Rangnick will sign a two-year contract with Austria but his term will automatically be extended by another two years if they qualify for the 2024 European Championship.

“I will take over as national team manager of Austria at the end of the season but will continue my consultancy with Manchester United,” Rangnick is quoted as saying.

“I’m really looking forward to playing my part in helping United become a real force again. It is an honour for me to take on the role of [Austria] manager

“The prospect of contesting the European Championships in Germany with a young team hungry for success fills me with great anticipation.”

Rangnick will begin work with Austria immediately after fulfilling his commitments as interim boss at Old Trafford, linking up with the national team for their UEFA Nations League games in May.

The 63-year-old walked through the doors at Carrington last year with the purpose of guiding the side until the end of the season before taking up a consultancy role at the club.

On the pitch, it’s been far from pleasant for the former RB Leipzig chief and his influence at board level might not be as big as some would have imagined, with his new job with Austria expected to take up a large chunk of his time. That position is, however, not expected to interfere with his duties as a consultant until 2024.

SN’s verdict…
It’s fair to assume that had Rangnick’s brief stint as manager went better, the club would have pushed for a far more influential role as a consultant but the dire conclusion to this season has most likely contributed to their light-footed approach.

The full capacity of Rangnick’s consultancy role is yet to be revealed by the club but with the job with Austria now confirmed, it’s unlikely that he will have a large influence on the club’s future.

Erik ten Hag will take over from Rangnick at the end of this season and their relationship will be paramount, another factor that could decide whether Rangnick retains a hands-on role.