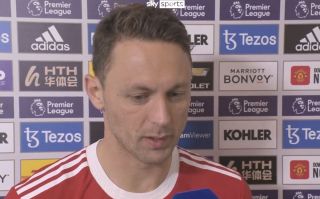 Veteran midfielder Nemanja Matic has sent an emotional farewell to Manchester United ahead of his departure at the end of the season.

The former Serbia international announced earlier this year that he will be leaving the Red Devils once the current campaign comes to an end.

Speaking after Thursday’s Premier League match at Old Trafford against rivals Chelsea, Matic, who also spent eight years with the Blues, said: “For me, it was a pleasure, an honour to play at Old Trafford for five years.

“[…] Three more games to play and United will stay forever in my heart, together with Chelsea because I also played for Chelsea.”

“Man Utd will stay forever in my hearts.” ❤️
“I’m sure better times will come.” 🤞

Nemanja Matic’s immediate reaction after a 1-1 draw with Chelsea at Old Trafford. pic.twitter.com/DCWsVIjmyW

Since joining from Chelsea back in 2017, Matic has gone on to feature in 186 matches, in all competitions, directly contributing to 14 goals along the way.