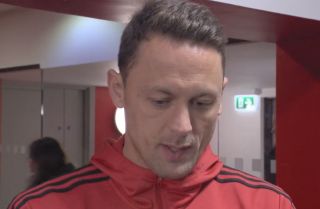 Manchester United midfielder Nemanja Matic has spoken out ahead of the Red Devils’ Premier League match against Chelsea on Thursday evening.

The Red Devils, led by interim boss Ralf Rangnick, will know that although Champions League qualification looks to be too far out of reach, it is important to finish the season as strongly as possible.

However, with just four games remaining, it is going to be hard for Rangnick to convince the squad there is anything worth playing for, other than pride but according to Matic, that is exactly the driving force behind the team’s desire to perform to the highest level they can.

Speaking ahead of Thursday’s clash at Old Trafford, the former Serbia international said: “We didn’t have a great season but we are talking every day, we are trying to do our best to finish the season in the best possible way.

“We know our supporters are not happy, we are also not happy. But, four more games to play and we will try to win every single game if possible…”

Nemanja Matic wants Manchester United to end the season on a high after a difficult year pic.twitter.com/LfzVSn02oX