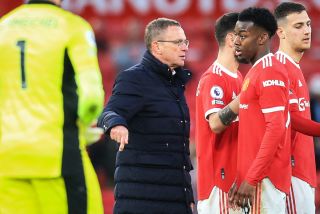 There are very few positives to take out of the 2021/22 season for Manchester United supporters but one silver lining in this disastrous season is Anthony Elanga’s emergence.

The young winger was handed his debut by Ole Gunnar Solskjaer late last season but didn’t establish himself as a first-team regular until Rangnick was appointed earlier this season.

Since then, Elanga has relegated Marcus Rashford to a near-permanent place on the bench and although he is still searching for his first Old Trafford goal, Elanga is certainly getting supporters off their seats.

Rangnick has endured a disastrous half-season since he took over late last year but there is a good chance that Elanga is his legacy, at least from a manager’s viewpoint. His influence at board level could very well have a greater impact on the club’s future.

Elanga celebrated his 20th birthday this week and United’s interim boss was quick to heap the praise on United’s rising star, describing him as a ‘top mentality player’.

“Well, since he is a clear head, since he is a top mentality player,” he is quoted as saying by the official Manchester United website. “I’m sure he can take and make the next steps, which are also important for him to take.

“It’s not for him an issue of character or mentality. I’m pretty sure, whenever I saw him train or play, even in the first training session the night before the Crystal Palace game, I knew his name but had never seen him play before. So I asked my coaching staff at the time, Kieran [McKenna] and Darren Fletcher: ‘Who is he? I haven’t seen him play before’.

“Since then, he has always been a player who gave his very best, where I could always be assured what kind of level, physical level and mentality level, he will invest.”

SN’s verdict…
As if this season hadn’t gone well enough for Elanga, he made his senior debut for Sweden in the most recent international break and there’s reason to believe that we’re only just getting started.

Having just turned 20 and fresh off signing a new contract, Elanga will be delighted to hear the kind words from his manager, especially when incoming boss Erik ten Hag will largely rely on evaluations from the stand-in chief.